Overview:
A heavily modified version of the classic party game Mafia, played on two subway trains, with an extra helping of crazy sauce!

The History:
We designed Train Mafia for the Come Out & Play 2009 festival in New York City. The original game ran on the NYC Subway from Times Square up to the Bronx and back again (on the 4). Since the, we’ve run the game on the Copenhagen Metro twice.

In 2011, we ran the game in Berlin, at Invisible Playground’s You Are Go! street games festival.

We’d also love to run (or see others run) the game in other cities! Especially in cities with a circle line. Email us if you’re potentially interested.

The Rules:
Train Mafia is a heavily modified version of the popular party game Mafia (a.k.a. Werewolf), re-envisioned for play on a subway or train.

Why trains, you ask? To raise the stakes, of course! Players who are “lynched” are kicked off the train (at the next stop), and must wait in shame for the following train – a kind of “afterlife” train – to join a second, interwoven game.

Yes, the two games are interwoven! Players are assigned two teams (one for each game), and are ultimately awarded points for each of their teams that win. Players in the first game should therefore be careful about who they send to the second game, and when.

One moderator is placed on each train (the main train, as well as the following train) to run each game. Players enter the same subway car (on the first train), and the game then lasts the length of the specified route (ideally, about an hour).

In the first game, the citizen and mafia teams compete. Groups of players vote each other off the train, hoping to vote off members of the opposing team. The mafia team wins if they outnumber the citizens at the end of the ride. The citizens win if they manage to vote off all the mafia players (at which point they will be immediately notified). The teams tie (neither team gets points) if neither of these conditions are satisfied.

There are no traditional day/night rounds as in traditional Mafia. Instead, rounds are demarcated by certain subway stops as announced by the moderator. Players must organize the lynching mobs themselves, recruiting their fellow players to accumulate the requisite number of votes

To successfully “lynch” another player in the first game, a group of at least half of the remaining players must approach the moderator and register their vote. Lynched players cannot speak, and must leave the train at the next stop, to wait for the next train (details below). Players can lynch as many players as they want each round.

Mafia members, however, can only kill up to one target per round. To make a kill, any Mafia member can catch the attention of the moderator and physically point to a target. The Mafia member will want to do this surreptitiously, otherwise they risk incrimination.

The second game – a contest between different religions – is played by voting for representatives, rather than voting against players. Each player is assigned one of four different religions, and this identity is unrelated to their team in the first game.

Each round (again, demarcated by specific stops as announced by the moderator) all players vote to give a “divinity point” to one of the players. At the end of the game, that player will reveal their religion and everyone on that same time will score one point for each divinity point earned.

The highest voted player is awarded the divinity point, where only plurality (not majority) is needed. In the case of a tied vote, no player receives any points.

Keep in mind that players are allowed to lie about what religion they are. As such, it may behoove players to start forming alliances and sharing identities in the first game, in preparation.

2. Typically, Train Mafia is specifically played in the last car of the train, such that players know where to board the following train.

3. In public, it’s probably prudent not to run a game of Mafia with the traditional “killing” terminology. When we run the game, we have “nerds” who are trying to banish “hipsters”; the hipsters can vote to “exclude” the hipsters. And in the second game, religions are replaced by city neighborhoods, such that players have to “represent” their district, e.g. Manhattan, Brooklyn, Queens, etc. 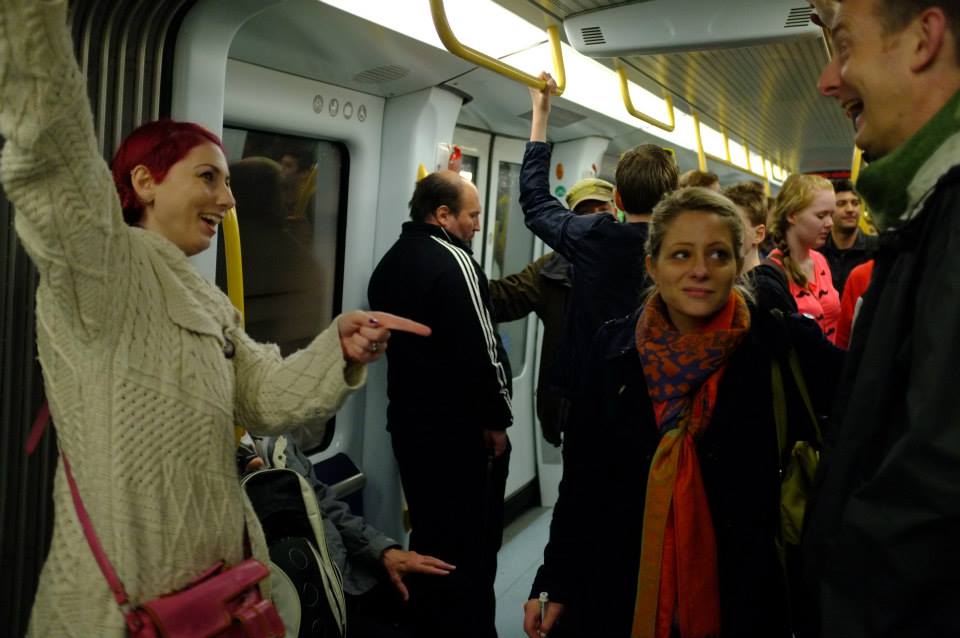