One of the pinnacles of good game design is a game that can be played in many ways where the players co-design and shape their own experiences. Especially in multi-user environments on the internet, different player types playing different “games” in the same environment can create an ecology of players reinforcing and supplementing each other’s experiences. A typical example would be MMORPGs, where some players enjoy playing the crafting game, others the high end PvP game, and still others enjoy just playing the auction house, brokering goods. Richard Bartle first aired these ideas in 1996 in the now-classic article “Hearts, Clubs, Diamonds, Spades: Players who suit MUDs.” He described the players of MUDs as roughly four different kinds of players: Killers, Achievers, Explorers and Socializers. More importantly, he analyzed the interactions between these types of players in online environments.

Bartle has been used and misused for a lot of stuff, and I am in particularly skeptical about using this theory prescriptively, which easily could lead to a self-reinforcing loop of only designing games that cater to specific experiences that players already expect. Nevertheless, it is always fun to apply this taxonomy, as well as any other theory of personality types, to any social ecosystem in order to model some of the social dynamics happening.

So what games can be played in Chat Roulette?

Some of the content below may be NSFW. We’re talking about ChatRoulette, after all..

All who have played Chat Roulette know this player. According to surveys, 13% of all chats feature male genitals, but my guess is that this number fluctuates heavily, especially because these harassers are a part of an ecosystem. There’s no fun in being a harasser if everybody else is harassing too. This is a classical negative feedback system; the population of harassers controls their own growth by making it less and less attractive being a harasser in an environment with more harassers. Unfortunately, the concentration of harassers also heavily influences the population of other player types, and there is a risk of the social dynamics snapping where everybody else leaves the system faster than the harassers can self-adjust. This would eventually lead to the destruction of the ecosystem. This is a risk that the founders seem to be aware of, and they have recently hinted at initiatives of social engineering the system.

Until now it seems that the only initiative has been inclusion of a lose screen for players who gets flagged for inappropriate content three times within a period of five minutes. This is hilarious because it actually adds game mechanics to the game of the harassers. Is the best strategy a hit’n’run strategy of only flashing once per five minutes, or is it possible to accumulate more shocks with a kamikaze sprint?

My female office buddies play as achievers. They are actively searching the harassers, loudly commenting on size, positions, hairstyle or engagement. Probably quite contrary to the harassers’ intentions, the achievers encourage their activities and cheer on their effort.  I by no means say that this is the typical play style of female players, but rather mean to highlight that some players enjoy Chat Roulette from the safety behind their screen as a way to go on a quick pervert safari. Unlike other player types, the achievers aren’t that reliant on a low “pervert ratio,” but my assumption would still be that the non-sexual content of Chat Roulette is more appealing than a site actually devoted exhibitionism/voyeurism. I guess it is also more entertaining to watch the lions in the actual wilderness on a safari than imprisoned in a zoo next to all the other animals. Like the killers, the achievers aren’t really interested in a two-way social interaction. They are acting upon the killers, like the killers are acting upon everybody else.

I – I guess – am mostly playing Chat Roulette as an explorer. I’m exploring the social landscape, dodging bullets from incoming killers in search of the hidden gold nuggets of the virtual space. Let’s face it, I’m not the most talkative guy, I’m not on the roulette to actually get to know strangers or pick up girls. I’m perfectly happy with the friends and girlfriend I have. Nevertheless, I’m still trawling the channels, lead by the promise that something might happen, probably something of an erotic nature. Needless to say, we explorers never find what we’re looking for. Like an endless dungeon crawl, I’m evading one monster after another, penetrating the dungeon deeper and deeper without ever questioning what I’m looking for. Would it be a better experience for me without the perverts? – no, that would be like taking the monsters out of Super Mario, a run through a deserted landscape ending with a “Thank you Mario, but our princess is in another castle!”

A few weeks ago, Patrick and I had a run of chat roulette, and quite contrary to the logic of the game, we actually found gold. A (quite young) girl unleashed her breasts upon us without warning. We didn’t really know how to handle the situation, but we didn’t manage to get anything serious done the rest of the day. These adventures – random girls, and not the same old perverts, getting a sudden glimpse of inspiration leading her to show tits, panties or whatever – these are the adventures that fuel the explorers’ digging. 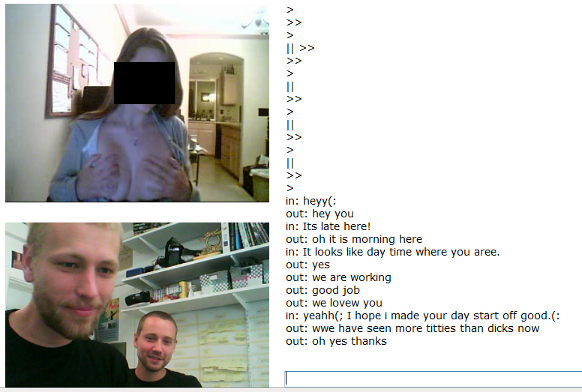 The last player type, according Bartle, would be the socializer – a player that actually engages in the social game in order to connect to other players and build real micro relationships. The fascination of sitting face-to-face with a complete stranger to see what would happen, no sexual undercurrent, no desire show or see naked skin, just the earnest interest in another human being.

I don’t know if anybody is playing that game on Chat Roulette. Probably not, but the player type is still extremely dominant. It is the type we all say we are playing, the type the media write about, the type that gets scared away by the perverts – the type that nobody is playing, yet the type that vitally acts as the excuse for everybody else to be there. The Killers are there because of the fantasy of shocking an innocent socializer, the achievers use the legitimacy of the socializers in order to tour a perverted space, and the explorers dig deeper and deeper with the promise of finding a random socializer that magically decides to show her tits just to them.