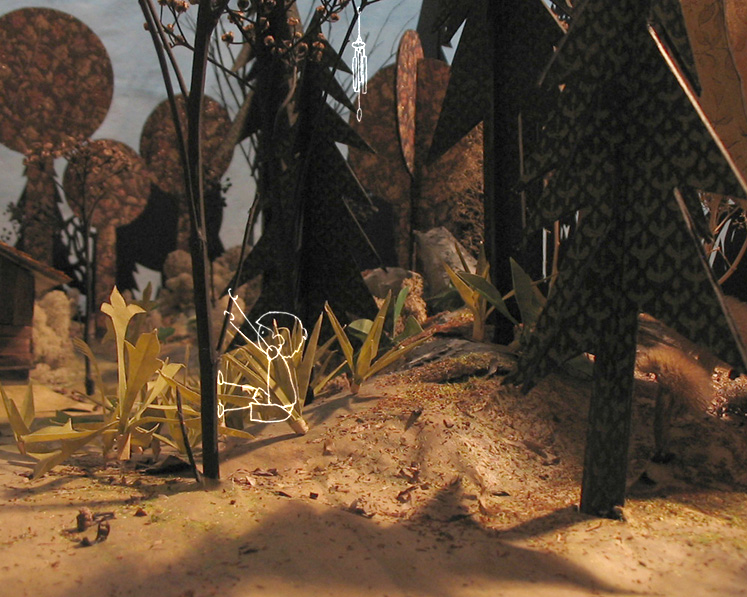 Two years ago, our very own Nils Deneken premiered his small adventure game, Rückblende, at IGF and IndieCade.

The download links have been down for a while, but Copenhagen Game Collective is happy to report that we’re now hosting the files!

Rückblende is a must-try for anyone interested in games, or atmospheric interactive environments more generally.

Nils built the entire game environment in the real physical world, as a large diorama. Then he filmed the set and layered the various “memory” sketches on top of that footage. The aesthetic effect is stunning, to say the least. Plus, the game features a very tasteful and poignant use of Billie Holiday’s “Without Your Love,” which of course won me over instantly.

In the interest of full disclosure, Nils is a close friend and a colleague. Still, I fell in love with the game even before I knew him personally. It was my favorite game at IndieCade 2008.

I see Rückblende as a kind of Geogaddi of videogames – very wistful but also very ambiguous (a little disturbing, even), filled with dark little secrets, anchored around themes of memory and childhood, and crafted with great care and attention to detail. It brings to mind some of my most memorable gaming experiences – Myst, Knytt, and The Legend of Zelda: The Wind Waker, for example.

Seriously, I can’t recommend the game highly enough. Of all the games that have had a lasting affect on me, Rückblende ranks somewhere near the top, right alongside the best of ’em.

[…] and we’ll be showcasing a number of our games, including B.U.T.T.O.N., Dark Room Sex Game, Rückblende, Fuck You It’s Art!, and several other projects. Actually, we’re going to run the […]