Are you going to be in NYC on Saturday evening, October 2? Join us for a “Brutally Unfair Game Bash” at Babycastles in Queens!: 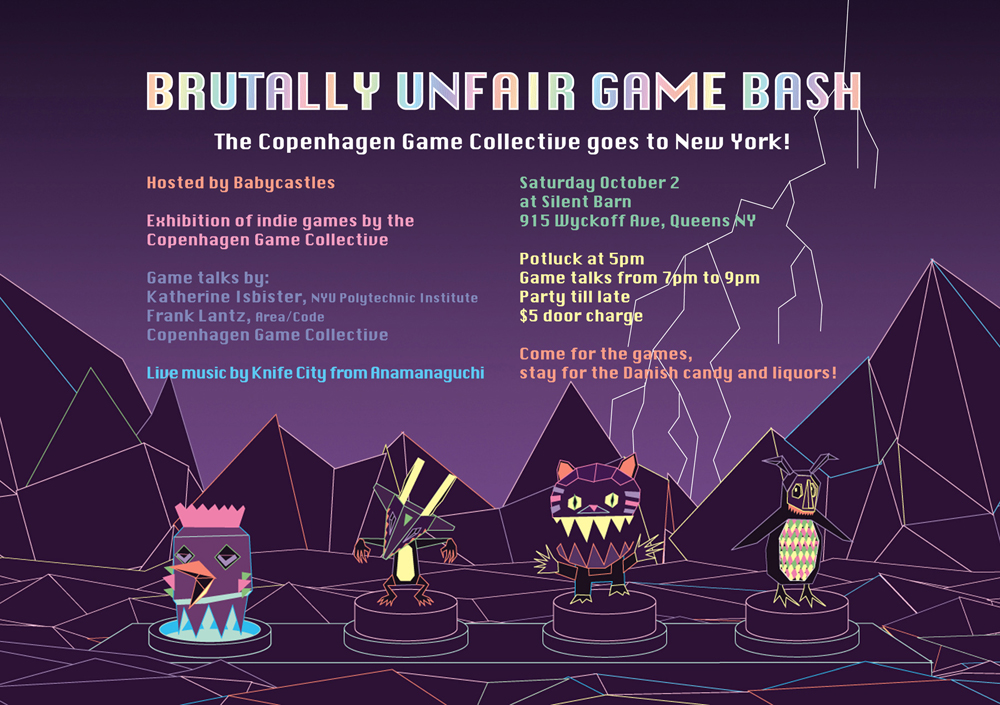 We’ve planned the event together with our friend, NYC-based game artist Zach Gage. I’m very happy to announce that both Katherine Isbister and Frank Lantz are going to kickoff the event with two game talks. Lau and I will also join in on the speaking fun – I’ll be speaking on deliberately “broken” games, and Lau will be talking about our efforts to push indie gaming out into the living room, beyond the screen.

After the talks, we’ll be throwing a party! Knife City from Anamanaguchi will be on hand to perform some live music, and we’ll be showcasing a number of our games, including B.U.T.T.O.N., Dark Room Sex Game, Rückblende, Fuck You It’s Art!, and several other projects. Actually, we’re going to run the official 2010 World B.U.T.T.O.N. Championship.

Email us if you want to hear more about the potluck!

[…] good news! While most of the team will be in New York partying at Babycastles, Dajana is flying out to London to showcase B.U.T.T.O.N. at The Indie Games Arcade for Eurogamer […]

[…] really excited about showing B.U.T.T.O.N. at IndieCade, Indie Games Arcade,  and our party at Babycastles, and so we’ve all been working hard to finish a new build. This hard work involves […]

[…] from the Copenhagen Games Collective will be at Babycastles in Queens this Saturday, October 2nd, starting at 6:30. Among the games […]

[…] note that that photo is brought to you by Ugly Machine, who also caught some fun photos of our Babycastles party last October). Share this […]