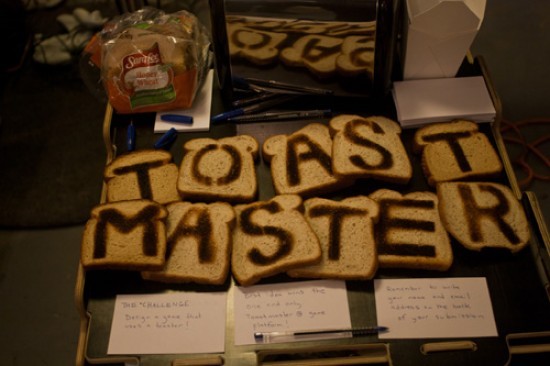 B.U.T.T.O.N. wasn’t the only “project” we showed at IndieCade this year. Last year, I had so much fun co-designing and running Fuck You, It’s Art! that this year we resolved to start some similar game-related hi-jinx.

Along with our compatriots Christoffer Holmgård and Benedikte Mikkelsen from Duck and Cover Games, we organized a silly game design challenge. The task: design a game that runs on a toaster. We provided the toaster and a bunch of bread, and invited the public submit their design ideas. The prize, of course, would be the toaster!

To our surprise, we received quite a few submissions – over 30. The most common idea involved doing something right when the toast pops up, such as hitting the bread in some way (e.g. spearing the bread with a butter knife). On the other side of the spectrum, the strangest (and most cynical) idea was for a “Realist survival noir game in which toast going into toaster is a metaphor for rape.” Wow.

Our favorite submissions embraced “toast culture” in a deeper way. One idea I particularly liked, submitted by Ryan Brown, was a game in which players race to coat their toast with butter, as evenly as possible.

In the end, we chose this idea by Mims Wright:

Draw a card with a shade of brown. Each player takes turns trying to create toast that most closely matches the card in colour. Winner gets to pick the type of jam!

We had actually received another loose variation on this coloration idea, but Mims’ submission had two things going for it. First, we liked the little illustrations. Second, and more importantly, we love the stipulation that the winner gets to pick the type of jam. Details matter! Personally, I’ve always obsessed over the color of my toast (gotta be that exact brown…) so this design was perfect.

Unfortunately, Mims was not present when we awarded the toaster prize at the IndieCade after-party. So instead, we gave the toaster to Akira Thompson, who submitted our second favorite idea – the funniest of all the submissions. His game?:

First person to take a bath [with the toaster] loses.

What really made this submission special was the accompanying picture, along with the warning text “NO U LOSE!” Priceless.

Congrats to Akira and Mims, and thanks to everyone for playing along!