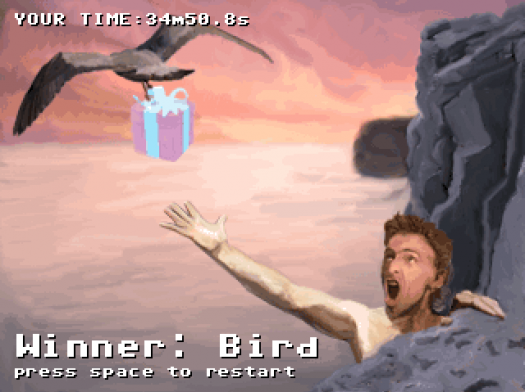 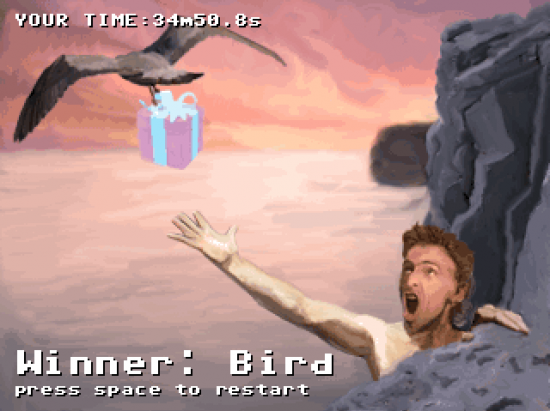 Here at the office, we’ve been obsessed with GIRP, a brilliant new online game by Bennett Foddy.

And fuck! After 34 minutes of careful keyboard calisthenics, I was finally grabbing for my prize – the very last ledge – only to have the fucking bird beat me to it. Thing is, I think I might be as amused as I am frustrated.

My colleague Lau, by contrast, is quite the GIRP prodigy, and can beat the game in ~20 minutes. Geez, I have my work cut out for me.

Despite my epic defeat, GIRP has quickly become one of my all-time favorite web games. And until something better comes along, it’s my pick for Game of 2011. I love how the visceral physics of the death-defying climb are closely paralleled by my own struggle to keep my sweaty fingers on the keyboard. As Foddy himself observes, “You have to grip the keyboard just like you would cling to the cliff.”

Many of us have experienced the so-called Tetris effect, where thoughts of the game start pervading our thoughts and dreams, as if our brain was still running the game. Well, no joke, I’ve started to experience the “GIRP effect” – when I close my eyes, I start thinking about and feeling the physics of swinging from ledge to ledge. My brain just can’t put the game down.

This feeling that you, the player, are actually climbing yourself relies on the knowledge that there are no saves or extra lives. One mistake and you’re dead. The most nerve-wracking example of this has to be the segment at ~65 m where you need to drop down to the ledge beneath you (protip: make sure you’re holding down the flex key when you try to make that falling grab. I’ve learned this the hard way…)

The good folks over at Hide and Seek have written a blog post about GIRP and uncomfortable interfaces more generally. On this point, I have to agree! Part of the reason I love GIRP is because it demonstrates such a creative and excellent use of abusive game design. I’ve written about abusive game design extensively (paper here, interview here) and will be improving and extending that work in my PhD dissertation-in-progress. To that end, I’ll definitely be mentioning GIRP in my upcoming article on abusive game design, Marina Abramović, and dialogue.

Foddy, by the way, is the guy behind the equally difficult and hilarious game QWOP. Highly recommended – it’s the funniest iOS game I know. Foddy has also done an illuminating reddit Q&A, here. Apparently, he is also the deputy director of the Institute for Science and Ethics at Oxford University. No, seriously. You can’t make this stuff up!

I’ll end this post with some delightful wisdom from the man himself. In that reddit Q&A, someone asks about QWOP: “Are you supposed to just do the splits and drag yourself along on one knee?” Foddy’s response?:

You are free to do that, just as you are free to cheat at solitaire, or to eat your own faeces. I recommend you try to have some dignity, though.

Lau and our friend Pippin Barr are currently engaged in a GIRP war! Pippin claims a personal best of 14:33, but Lau just came up big with 13:40!: 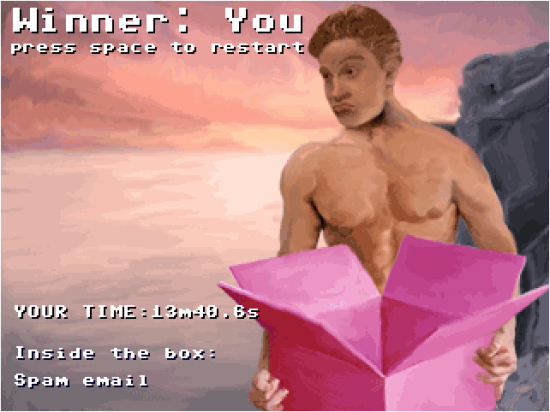 Pippin, by the way, has his own nice blog posts on GIRP, here and here.

Of course, not even Lau can touch some of the crazy GIRP speed runs out there. This person managed to do it in only 5:41!