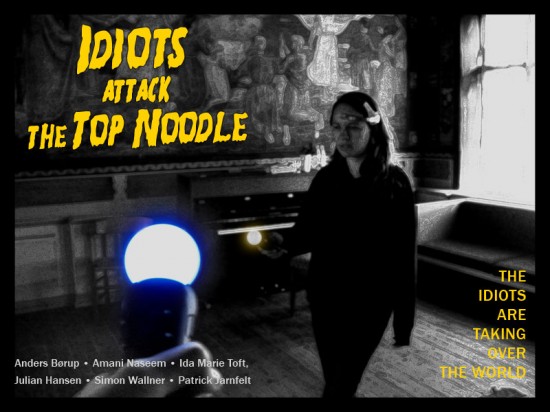 Some weeks ago, a couple of us went to the exile game jam (that we are also hosting). There, we split up and worked on different projects that all came out quite well. I had previously met up with some interesting people from Copenhagen and pledged to make a game with them using their newly obtained Brain Wave Sensor (EEG device), the MindWave. I like thinking about video games in different ways; be it different game mechanics, aesthetics or in this case novel input devices. We felt like this input device had not been utilised very well for games. Until now 😉

So we created a survival horror game with no graphics and played using Playstation Move Controllers and the Brain Wave Sensor. The game is called “Idiots attack the top Noodle” and you can read more about it in its project page or watch the introduction video we made at the Invisible Playground‘s event: Open Playground CPH. In this post, rather than describing the game itself, I will delve into the process of creating the game idea, the research into it and the inspiration for it.

As I mentioned, we don’t believe that there are any good games utilising the Brain scanner’s potential. Many games only use one of the parameters given by the brain sensor (a proprietary algorithm calculating the concentration or the meditational state of the player) to control a single thing in the game. It is very one dimensional. Now, more complexity is not necessarily superior to keeping it simple, but when the game uses the brain measurement to control a game mechanic, that could be substituted with other input devices, e.g. the mouse, then it kind of beats the purpose. Instead of being an integral part of the game, it becomes the focus point. The game suddenly becomes about concentration or about relaxation. Mastering the game is just a question of mastering the input device. These games certainly have a place in the gamosphere, but don’t seem that interesting to us. These games could for instance help children with attention disorder to concentrate better, as NeuroCog tries to do with their Focus Pocus game.
If you know any games that utilise the Brain scanner in some kind of interesting or novel way, please write it in the comments.

The way that we went around the idea generation, was to think narrative before game mechanics. In the beginning we had two brain scanners, which lent itself to very different games. We had the obvious idea of having two “mind wizards” in a standoff. The two wizards could choose to charge different magic spells based on either meditation or concentration. But this didn’t seem quite interesting enough. Again, the main focus of the game would be on mastering the input device (and your brain of course) instead of mastering the game. And that version could be played as a single player game. Then there wouldn’t be a point in making it a human versus human game.

So we thought that there might be an interesting dynamic in letting the players influence or ruin each other’s concentration/meditation. Ruining concentration could happen by making silly noises or touching the other player (in a painful or pleasurable way). We toyed around with the idea of using a pain west developed by Jesper Taxbøl. This device simply makes it possible to zap the players as a mechanic in the game. Our early idea using the west were something like this:

The game mechanics are not fully developed yet, since we didn’t get to create this game.One of the brain scanners broke. However, I still think this game has some potential for being fun.

Having only one brain scanner meant that we had to think about the game completely different. We liked the mechanic of concentrating and other players ruining the concentration. That felt most rewarding to us. But now the game had to be asymmetrical. There could only be one player with the brain scanner. So we went back and talked narrative to get more inspired. The brain scanner measures different brain waves. Alpha, beta, theta, etc. But all of these are secondary to the actual neurological surges in the brain. So we talked about, that the reason why this (limited brain scanning) has so much appeal, is because we are, as humans fascinated with “magic” behind it; like true mind reading and mind control. Even on NeuroSky’s own webpage it quotes Arthur C. Clarke:

Any sufficiently advanced technology is indistinguishable from magic

This got us to talk about mind control and how cool it would be if one person, wearing the scanner, could influence or control the other players be thought only. (on a side note: I actually saw a pretty cool clip about actual academic research into mind control. Watch it here if you like). The narrative setting we got to discuss, reminded me of the science fiction story: The Marching Morons. And inspired us a lot in creating the game.

Again; Go to the project page, if you want to know more about the game.

last winter, I made a game that used the MindWave headset to encourage both meditation and concentration: http://cosmopol.is/lk/

very cool application!
and excellent use of the Move controller
now perhaps someone could make a mind-control version of Johan Sebastian Joust…

I’m interested as well as considering what you are writing about here.