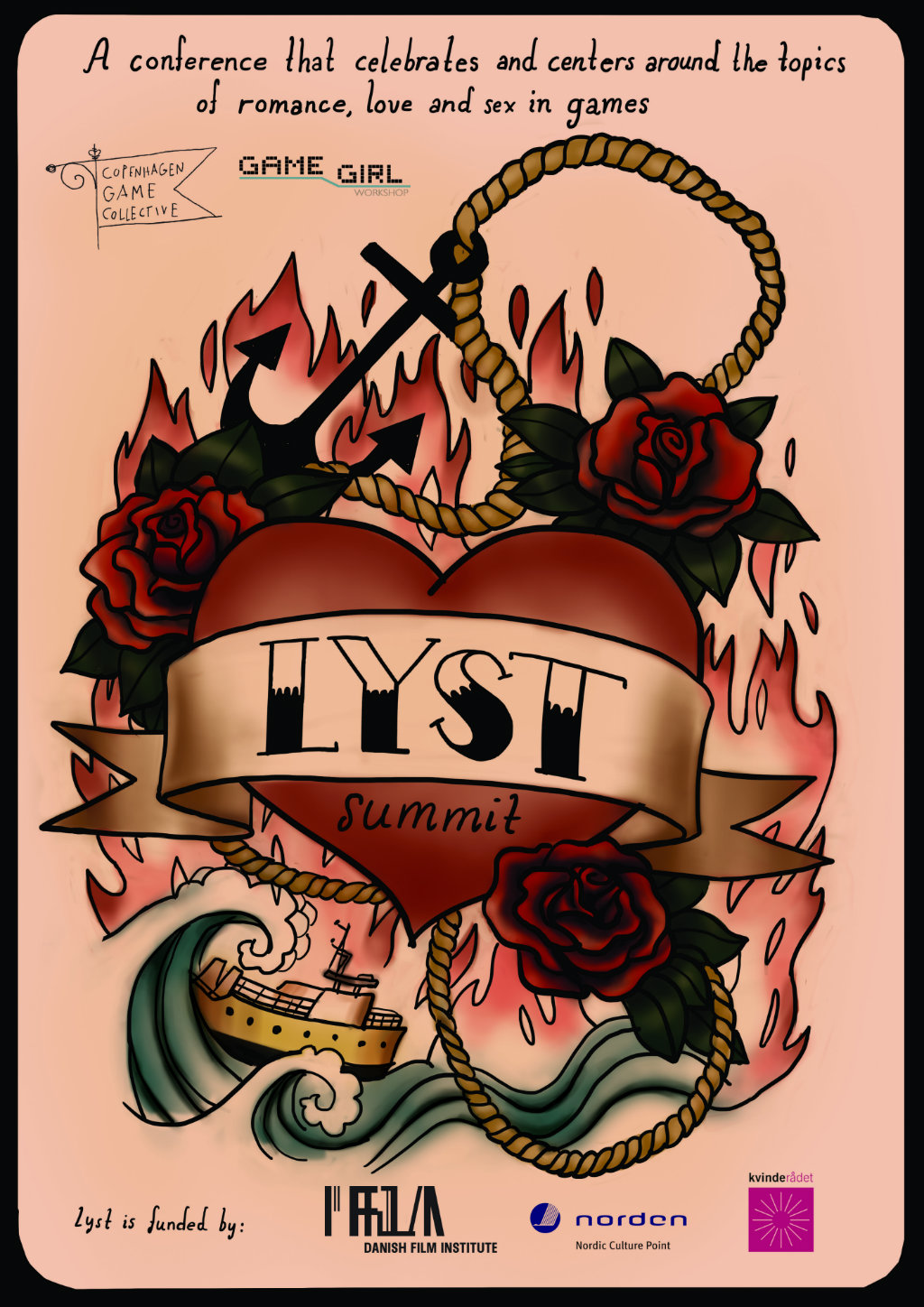 Thinking back at Lyst now, I can’t say anything else than it was really amazing. I can’t think of one thing that was not great! On so many levels: Speakers, food, people, games… It was the first time for someone from Copenhagen Game Collective and Game Girl Workshop to come together and organize something like this, and we were quite nervous. Especially taking the topics into account: Romance, love and sex in games. It felt like so many things could go wrong, on so many levels.

Patrick Jarnfelt from CphGC and I, Andrea Hasselager from Game Girl Workshop first started collaborating on the iPad game Moontide (still in production), an abstract game that emotionally follows the female cycle. We quickly found out that we were a dynamic duo, and when Patrick told me about the idea that had been circulating around Copenhagen Game Collective for a while: A game jam about relationships emotions, and sex, I was like ’Let’s do it!’ CGC had been a bit hesitant about doing it, because of it being sensitive topics and stepping into the (important) and ongoing discussions in the games industry, right now. I guess our conclusion was: Yea, we will probably make mistakes, but if you don’t start somewhere, you will never start. 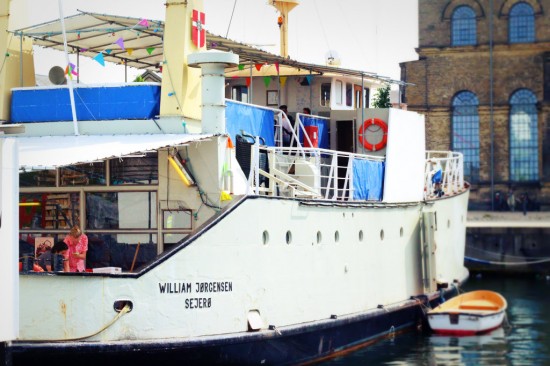 For a different kind of conference and game jam, we needed a different venue, and we had our minds firmly set on the old ferry, William Jørgensen in Copenhagen harbor. Fighting a bit of wobbly stomachs and Internet issues, it turned out to be a perfect setting.

We soon agreed that it would be great to start out with a symposium, a day with speakers, to get the game jammers in the right mood and inspire to think out of the box.

Friday morning Anita from KVINFO started out the day by giving some insights into gender representation in media in general. Then Jaakko Stenros talked about Nordic LARPS, especially on how to show affection within a LARP and how to simulate sex. Patrick volunteered to try out the technique, which at first seemed innocent, touching the shoulders and upper body close to the neck, but when combined with looking into the eyes of the other player and breathing together, his comment was: ’It was actually like having sex’.

Menno Deen talked about the importance in the diversity game jams he is organizing, that help highlighting the fact that we need to get more diverse characters cast in games.

Christina Majcher talked about her personal experience, being a female games journalist, and often the only women in the room. 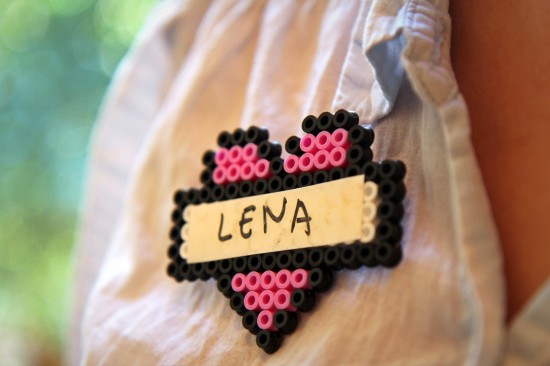 Lau’s talk was a great tribute to kids games and the exploration of sexuality they inhabit.

Ernest Adams put things in perspective and gave a different solution to how we could actually implement new models in games for love and sex.

Esther MacCallum went through romantic and emotional scenes in games.

Johannes talk was a mind-blowing rant about sexuality, sexual toys, and basically the diversity and different preferences within sex. What stands most clearly out to me, was the butt plug, that someone had been working on perfecting for 12 years.

Finally, Hanna told us about her project designing games for orangutans in Indonesia, tapping into a different kind of compassion while designing for them.

After an amazing day of inspiring speakers, we had the diva chef Martin cook us delicious dinner. Martin can, like real divas, get quite angry, it turned out, so if we’d been too busy to start the grills when he arrived to cook, I would hide at the other end of the boat.

After dinner, the game jam started, with a beautiful live performance by the Indie Bird Collective.

To get a diverse group of game jammers we had done the game jam with an application process and also invited some jammers from outside the gaming industry. We ended up having an interesting mix of experienced game jammers and some less experienced. By the color of their beautiful handmade nametag hearts, the groups could localize each other and start talking about ideas.

Friday night some of the game jammers slept on the boat

The Game jam was set in motion and progressing only interrupted by more delicious food, swims in the harbor, and amazing Thai massage. ”Is this a game jam or a spa?”

Some groups decided to sit outside on top of the boat, in the open, others indoors on the ferry deck.

With a great mix of game ideas, from physical games, analog games, to digital, there was a very different stress level in the groups before the deadline. 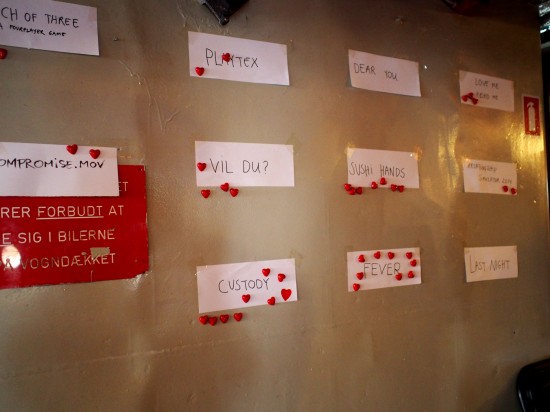 The 3 games that got most votes were also very different from each other, from Sushi Hands (web page here), a frantic party game for 8-24 hands where you had to make sushi pieces with your hands, to Fever, a 2 (or more?) player game, needing all the buttons on the Xbox controller, you had to match colorful shapes to the grey pattern underneath. Doing this often resulted in outbursts like: No, no, not that finger, press harder, more to the right, yes, that’s good, no, the other one.

Finally the winning game, Custody (web page here), a game about custody over a child. The game included 2 computers and a phone. Each parent had to play a frantic bejeweled-like game on each computer, which symbolized making money, and every 30 sec. they needed to pass the child (phone) to each other. While having the child, you needed to give it love, by tapping on the phone, teaching it something, or buying it things.

Amongst the other games there was ‘Vil du?’ (would you like to?) a game for children dealing with having being sexually abused, there was ‘The Touch of three – a 4-player game’ to play with friends, two people controlled two other people and made them touch each other in different places on the body. 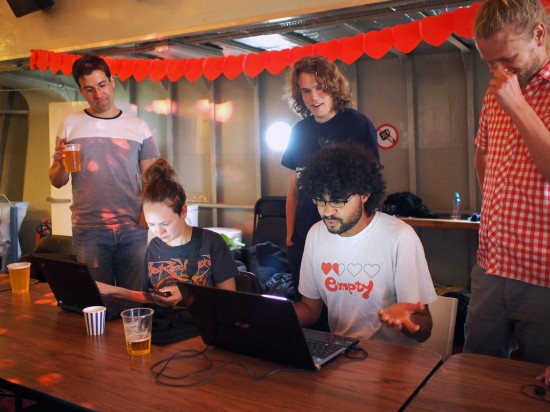 Saying ‘no’ was always an option, so it was up to the people controlling the ‘avatars’ to sense how far they would go. ‘Play-tex’ an iPad experience about sexual boundaries and exploration. ‘Compromise.mov’, a time-lapse about relationships interpreted in objects. ‘Love me, feed me’ was an app for the tablet, where you had to feed and play with a baby. ‘Relationship simulator 2014’ was a physical game, with words and 2 players, where you needed to get as close to a compromise with the other player as possible to win. ‘Dear you’ was a letter from one jam participant to her brother and best friend.

The most delicious dinner yet was that on Sunday night.  Then it was time for cleaning up and goodbye…It had been such an intense and intimate experience, that it seemed like people were hesitant to leave. Finally, around 10 pm we waved ‘bye, bye’ to the Love Boat.

So what did we learn?

That when you get a group of good people together and create the right atmosphere and setting, it is possible to make interesting games within the topics of romance, love, and sex. The diversity, going from very silly, to very serious and a lot of in between.– Hey, let’s do it again next year! 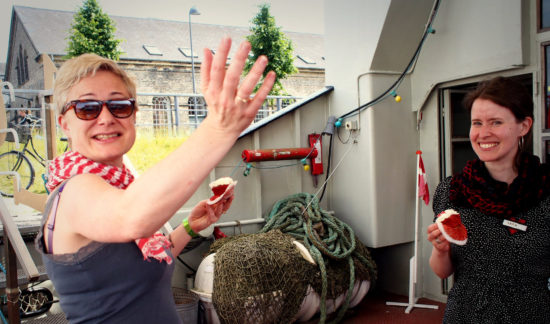 Sjors HoukesLog in to Reply

This looks and sounds great! Awesome initiative. Would love to attend next time.