Almost 2 months ago, one of my games was selected for the Wild Rumpus party in London. I was lucky enough to be able to attend, and it was everything I had hoped for. I consider myself a rookie in the Copenhagen game scene, not to mention globally, and I only found out about Wild Rumpus a year ago. For those of you who have no idea:

The Wild Rumpus brings together the best of indie mutliplayer videogames for the most unique events of crazy, exuberant, social and sometimes physical gameplay. Our games line ups turn conventional videogame culture on its head. Closer in spirit to party, playground, or even drinking games, these are all games that you can’t play at home on your own. So come along and LET THE WILD RUMPUS START! — thewildrumpus.co.uk

When we made LAZA KNITEZ!!, we designed our video game to mimick some of the affordances of a foosball table, where the social situation and space are a key part of what makes the game compelling for a broad audience. Then when we built the Buttfighter, we asked ourselves: “Can we get players of our game to stand around our video game in a public space, and can we get other people to pay attention to it?” This being our first video game, we started Googling so hard we almost poked a hole in the back of the internet. What we found was an emerging scene of independent developers feeling the same vibes. The Wild Rumpus seemed to be years ahead of anything else in terms of bringing these types of games to actual people, which is what they were intended for. They lift the burden of finding a space for people like you and me to go, where we can, at least for one night, pick up a controller and play a game of Samurai Gunn instead of a round of darts or foosball.

Not only do they provide you with the space, they do a marvelous job of curating and selecting games based on their accessibility, innovation, spectatorship, and the likelihood you’ll end up craving more.

Wild Rumpus – On a F**king Boat from Niall Henn on Vimeo.

On top of the unexpected Rumpus invitation, our company Glitchnap was invited to the Bit of Alright conference to showcase LAZA KNITEZ!! All of a sudden I was bringing two arcade games to London, for two separate events. I decided to celebrate by building an installation for it, only I didn’t have any money, or a network of people who were willing to help me out. I asked my few friends if anybody had a car and or a workspace, and was mostly ridiculed. After several phone calls however, I got in touch with the amazing Adam Read, who helped me locate some raw materials which resulted in the $0 Splintercade. The Splintercade was built out of three wood pallets and a plexi glass sheet which neatly covered the innards. It ran beautifully on the boat (did I mention it was on a boat?) and was afterwards carried out to the trash. I arrived on the boat on Friday, with my raw materials, a saw, a hammer and a roll of duct tape. For GO NUTS!!, the installation ended up mimicking the game in more than a few ways.

GO NUTS!! is a game I started to develop at the beloved Exile Game Jam in 2012.  Our actual game jam game had crashed and burned as we foolishly tried to work in an environment we weren’t familiar with. As we had just finished the Buttfighter, I was also disappointed that we didn’t really do anything with it. On Sunday, while the presentations happened, I sat down in my simmering rage and opened up a new Flixel project. With Mads’ expert coaching, GO NUTS!! was up and running in 1 hour and 30 minutes.

The main premise is simple: push the white square into the goals of other players, keep it out of yours. That’s it. It’s 4-player air hockey, with the most abstract physics implementation I’ve ever used. Over the following months, everytime I played it I felt it had more potential. Slowly GO NUTS!! is becoming an exploration of excess*. Already in the 1-hour prototype, there were visually excessive elements like near-infinite motion blur and flickering text, and the core mechanics were somewhat interesting. The left stick moves at normal speed, and the right stick dashes, resulting in a thumbwrestling, palm-flicking, carpal tunnel inducing sprint of movement that barely makes sense. Many games are visually excessive, like Dyad or Super Hexagon, which made me want to try to make GO NUTS!! mechanically excessive.

One feature we never got to implement in LAZA KNITEZ!! that I was very fond of, was the world events: power-ups that don’t just affect one player, they affect everybody and the way the game is played. Having GO NUTS!! a rigid skeleton of a game, I decided to implement as many different world events as I could dream up, triggering them whenever a player scores. No complexity is added to the objective or the controls, while new elements are introduced into the game. The “Oh shit what is happening” moment was distilled and GO NUTS!! came out as its essence, and mocks our incompetence.

Getting GO NUTS!! selected for Wild Rumpus ranks high on the list of achievements in my short career as an indie. It is everything I want games to be, and everything I want to make. But it is far, far from perfect. I want to add more, following the same restrictions I’ve imposed on the projects from the beginning, without adding any complexity. I want the game to scrobble Vines and put them as the background of the gamescreen, I want to include the glitch effect we used for Press X To Give Up, I want GO NUTS!! to feel like eating a cheeseburger while standing in a moshpit playing Minecraft.

GO NUTS!! has uncovered a hidden passion for the excessive within me. I was never able to stare directly at it, but indulging in excess, flooding my senses, drowning out the human condition and dissolving into the experience is my form of meditation. I have experienced it in music, sports, and visual art, and thanks to GO NUTS!!, I have an outlet in the form of a video game. * I knew what the word meant, but I would never have applied it to my game if Tommy Rousse hadn’t proposed it.
** I used synergize, sue me 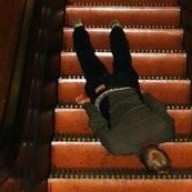