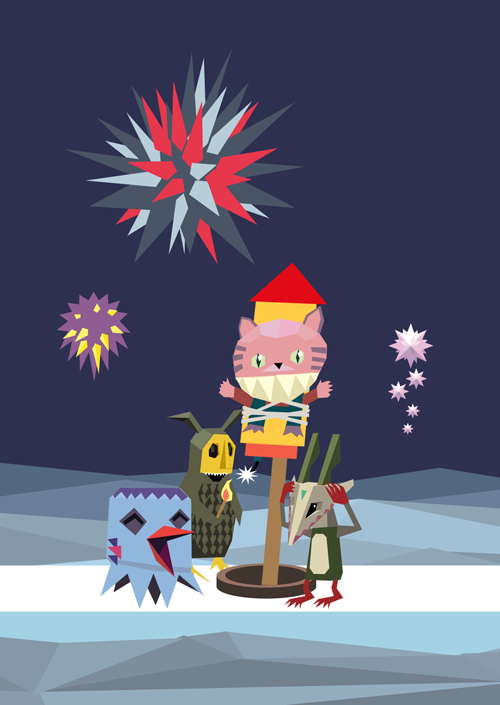 In case you missed it, we finally released B.U.T.T.O.N. for Xbox Live Indie. Woo hoo! Just in time for all the New Years Eve revelry!

Check out the game’s new website, or follow news about the game on Twitter. The Xbox Live Indie service isn’t available in all countries – or at least not in Denmark (booo!). Fret not, we’ll be releasing a PC version of the game very soon. Stay tuned.

So, 2010… boy, what a rollercoaster ride. For all of us here at the collective, there have been a lot of both highs and lows. We worked on some successful projects and, well, some not-so-successful projects too. We were generously awarded some development grants, but those of us trying to run companies here still struggled to make our limited funding last as long as possible (luckily for me, I have a stable day job). Our office got robbed. We hosted a number of events and exhibitions (here, here, here). Colleagues, friends, and interns collaborated with us on a variety of projects, and some of them even decided to stick around. We continued to explore what this whole “collective” thing even means exactly. We made lots of new friends, and even took some of them camping. Some of us (read: Nils) even became proud parents this year! There was laughter, tears, stress, celebration, doubt, long working hours, drinking, a lot of parties, and oh, a lot of wonderfully awkward gaming experiences (I’m looking at you, Bernie). The whole gamut, really.

That said, for me the story of 2010 is quite clear: 2010 belongs to B.U.T.T.O.N. Indeed, the year was literally bookmarked by the genesis and release of the game, in a poetic kind of symmetry. On January 7, the very first week of the year, we serendipitously arrived at the idea for the game while sitting around drinking beers at an impromptu birthday party (more history here). Then, on December 23, the very last week of the year, we released the game for Xbox Live Indie. Yeah!

In a year full of stresses and disappointments, B.U.T.T.O.N. served as a fountain of opportunity and creative energy. Each time the game made another indie games showcase, we figured that the project had run its course. After all, it was “only” a silly party game that we had brainstormed while drunk… right? But we kept working on the game, and as we did, we found ourselves farther and farther down the proverbial rabbit hole. Hell, we have more plans for B.U.T.T.O.N. now (stay tuned). Pretty good for an unplanned, seemingly stupid side project!

What’s more, I’m even writing about B.U.T.T.O.N. in my PhD dissertation. The whole experience of making and showcasing the game has transformed my thinking on a number of issues: design process, party game design, the role of technology in games, play and social context… and the list goes on. In short, B.U.T.T.O.N. has had a rather significant (and positive! I hope?) impact on my professional life.

Better than any accolades or research outcomes, however, has been all the wonderful people we befriended along the way, in Europe, New York, California, and elsewhere. In particular, B.U.T.T.O.N. provided an excuse for us to work on a game with our friend Nifflas – a dream come true for me, given how much I adore his work. And, of course, there’s the privilege of working with Lau, Nils, Lawrence, and the rest of the CPH gang. It’s precisely this social aspect of game development that makes it all worth it. That sounds so corny when you write it out, but it’s the truth.

Looking ahead, 2011 promises to be another exciting year: Bernie and Nils are close to releasing their super-charming PSP game, Where Is My Heart?; we get to present B.U.T.T.O.N. at IGF 2011; work begins on some exciting new projects; we’ll be curating Nordic Game Indie Night again; and we have a lot of other exciting news/projects that we’ll hopefully be able to announce soon!

My own wish for 2011? That Nils is able to continue work on his drop-dead beautiful action-adventure game, Mutatione. Fingers crossed.

Doug Editor
B.U.T.T.O.N., Mutatione, Research, The Collective, Where is my Heart?